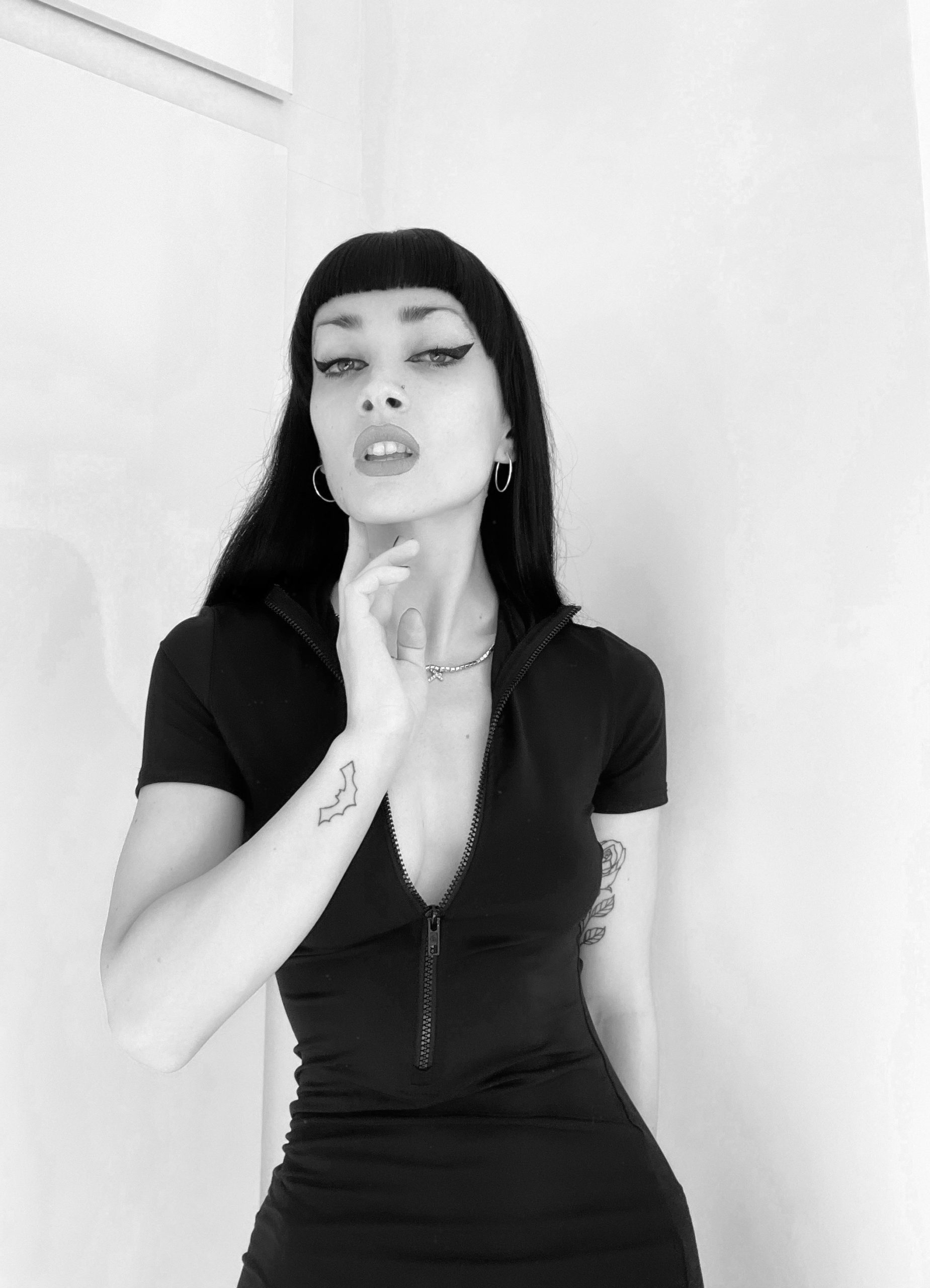 Hailed as ‘a raw and thrilling new talent’, Freya Beer is a singer-songwriter from West London. Inspired by art and literature, alternative fashion and music. Freya distills her disparate influences through a gothic soul and devil-may-care spirit that dares to dream in the darkness. Freya released her debut album Beast in October 2021 to splendid reviews and great public acclaim.

Freya sparked a wave of attention from the get-go with her self-released debut single “Bike Boy” in 2018 and its immediate follow-up “Six Months”. They earned Freya a BBC Introducing Live Lounge Session and a feature on Tom Robinson’s BBC Radio 6 Music show, and so the rollercoaster began.

With the wind in her sails, Freya launched her own label Sisterhood Records in 2019 as a vehicle to further her creativity. In February 2020 she released the single“Dear Sweet Rosie”, recorded in Manchester with accompaniment from I Am Kloot’s Andy Hargreaves on sonic drums. Drawing on literary influences like Allen Ginsberg’s ‘An Asphodel’ and Anna Sewell’s ‘Black Beauty’, the track went on to receive incredible support from BBC 6 Music and many rave reviews. Marc Riley awarded Freya a live session on his BBC 6 Music Show (which was then highlighted as one of his “Best of the Year” in December), and has continued to champion herbrilliance. Renowned music critic John Robb hailed her as ‘New Artist of the Day’ on his Louder Than War site and predicted a Mercury Prize in years to come.

Revealing her many shades with a series of exquisite lockdown cover versions, Freya bookended 2020 with the critically acclaimed single “Arms Open Wide”. Loosely inspired by the chilling atmospheres of ‘Tubular Bells’, the track saw Freya earn further support at BBC6 Music and PRS for Music placed the single in their Top 20 songs of 2020.

“Siren” came next in early 2021. An intoxicating brew of lyrical in-cantations and artful mystique,paired with arrangements of a piercing intensity. Taking its title from the J.W. Waterhouse masterpiece The Siren, Freya’s single finds her unearthing new secrets in those channels ofrenaissance art and mythology while re-appropriating the feathered flare of 70s era glam in her own shadow. She quickly followed Siren with the mighty The Calm Before The Storm, a mass ofgrunge guitars and Owain Hansfords thrashing drums.

Discovering new audiences and in-turn more about herself as an artist throughout the year, these creative experiences provided a powerful stimulus in recording her debut album: ‘Beast’. Recorded in London and Manchester, the 11 track album was released in October 2021 tounanimous fanfare, on Sisterhood Records. The title track Beast was released as the final single from the album, which includes the 5 singles and 6 other previously unreleased tracks including, the mesmerising crowd favourite To The Heavens and All their Worth and the very different Pure. In November 2021 The British Library requested Freya’s debut album ‘Beast’ for induction into their Sound Archive, to be catalogued, archived and preserved as part of the nation’s audio and cultural heritage for future generations, an unprecedented accolade for a new artist.

To coincide with the album release, Freya undertook her first full UK tour, backed by her superb band, featuring Pete Hobbs (the Boy Least Likely To) on guitar. Pete also produced most of The Beast album, Owain Hanford on drums and Arnoldas Dauny on bass . Freya herself excels on guitar and vocals. The 12 dates included packed shows in London, Manchester, Bristol, Brighton, Birmingham, and Glasgow.

On April 1st Freya released ‘Love Child’, the first single from her second album, a story which draws on the highlights and undertones of an individual with a toxic personality who seeks to undermine and sabotage another’s success by posing as some sort of spiritual being. The track embodies a cinematic essence sonically and takes Freya’s “glam goth noir” to the next musical level in her career. ‘Love Child’ is produced by Peter Hobbs (The boy least likely to) with Owain Hanford on drums and the addition of Arnoldas Daunys on bass guitar. The music video was directed by Say Goodnight Films.