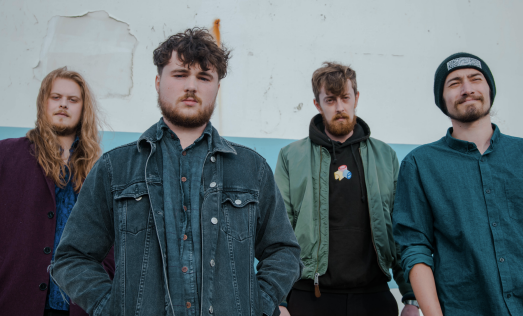 Hailing from British coastal town of Brighton in 2021, MY-HI are quickly becoming one of the most recognised new artists to be breaking through the UK rock circle.

MY-HI have been compared in sound with the likes of Frank Carter & The Rattlesnakes and Queens Of The Stone Age, the last five years have seen the band go from strength to strength, producing anthems that boast of stadium sized riffs, thunderous beats, and choruses designed for the airwaves. ♫♪♪

Also providing the filthy riffs on the night will be:

Speaking of Witches are an Alternative Rock band with strong Grunge and Blues influences, pushing out monolithically low riffs, deep thundering bass lines and machine gun precision driven drum beats. They have been roaming the Southampton circuit for 3 years before a hiatus and then releasing Luna Cycles in 2020, over the past 6 months they are already back in the studio recording and playing new tracks live, with another album to be seen in the next year or so. This band is perfect for fans of Queens of the Stoneage, Royal Blood, Tigercub and Foo fighters. With riffs this low you’ve got to come and see it for yourself. ♫♪♪

Any Road Formed in 2011 Any Road started out as a four piece band at a local music collage, and have had many line up changes over the years, with the longest members to date being Jon Weldon (founding member) and Tom Legg (who joined in 2013). This has meant a lot of different styles of music was written during these years and can be heard in their first album The Highwayman (2015). During those years they have been many difficulties for the band, and they have had many challenges with the ever changing lineup, but also a lot of high points such as being invited to open the Hey Joe stage at the Isle of wight festival in 2014, and touring across the UK and in one case Amsterdam. But to date have always been a regular in the Islands music scene, playing shows on and off the island over the years. ♫♪♪

One Dead Thief: Hailing from Southampton, One Dead Thief started life as a 3 piece grunge band. Now, in the aftermath of Covid 19, One Dead Thief emerge as an energetic quartet ready to make a mark on the British music scene with their unique brand of alt rock. ♫♪♪