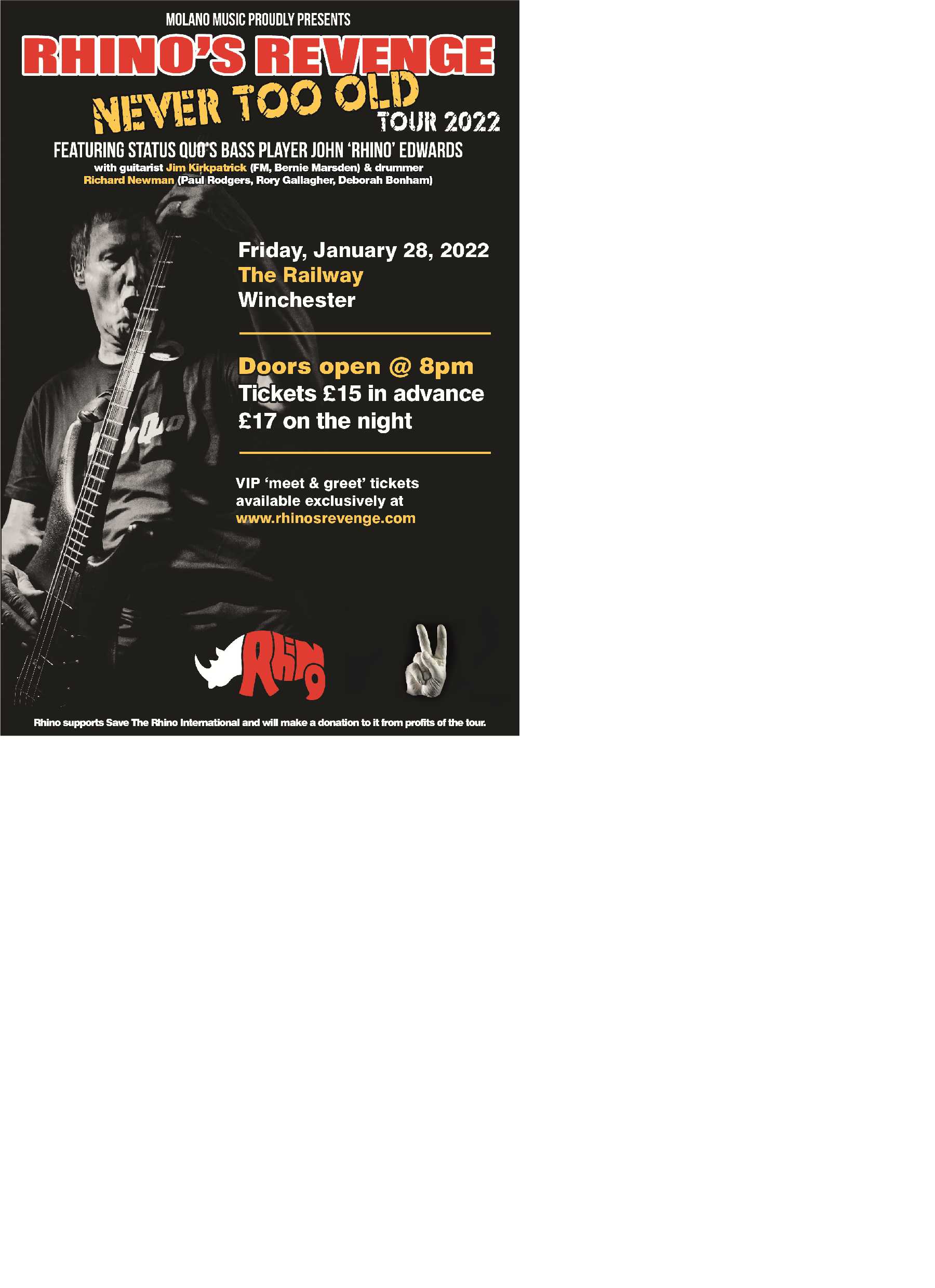 Rhino's Revenge are a rock band from London featuring John 'Rhino' Edwards of Status Quo on Bass and Lead Vocals.

Having rocked audiences across the UK and Europe during 2019, Rhino’s Revenge will hit the road again in 2022.

The title of the new tour is taken from the Rhino’s Revenge song of the same name.  Played for the first time during the band’s December, 2018, shows, ‘Never Too Old’ has proved to be an instant, sing-along hit.

The side band of John ‘Rhino’ Edwards, bass player with rock legends Status Quo, Rhino’s Revenge will once more continue to support Save The Rhino International.   “Thanks to the generosity of the people who come to our gigs, we’ve already collected a substantial amount for the charity,” says Rhino.

“The tour was originally booked to happen during August and September, 2020”, he continues, “and then again during May and June, 2021, but Covid-19 had other ideas.  It’s been a time of varying degrees of difficulty for us all but it’s not been easy for anyone.  Health and safety is still paramount, but we hope our audience is as keen as we are to blow the pandemic blues away with some in your face rock ‘n roll.”

With two albums of original material to its name – and a third currently in the making – Rhino’s Revenge brings songs from that repertoire to the stage alongside Quo favourites which Rhino has either written or co-written, some timeless rock classics and an element of the spontaneous unknown.  “I do like to surprise myself and everyone else by throwing in a song which we haven’t necessarily even rehearsed before, in the heat of the moment,” he admits.

Rhino’s Revenge is made up from a pool of stellar players, subject to availability, that currently includes guitarist Jim Kirkpatrick from FM and Craig Joiner from Romeo’s Daughter and drummer Richard Newman, who has performed with Paul Rodgers, Rory Gallagher, Jefferson Starship, Steve Marriott, Alvin Lee and Glenn Hughes.

“Paul Rodgers is my absolute hero and when he heard about my association with Save The Rhino, he signed several copies of his latest CD/DVD, gave them to our shared drummer, Richard, and we sold them on our last tour, with all proceeds going to the charity.”

Having previously been a member of acts including The Climax Blues Band, Space and Dexy’s Midnight Runners, Rhino was invited to join Quo in 1986 and has been permanent in the line-up ever since.