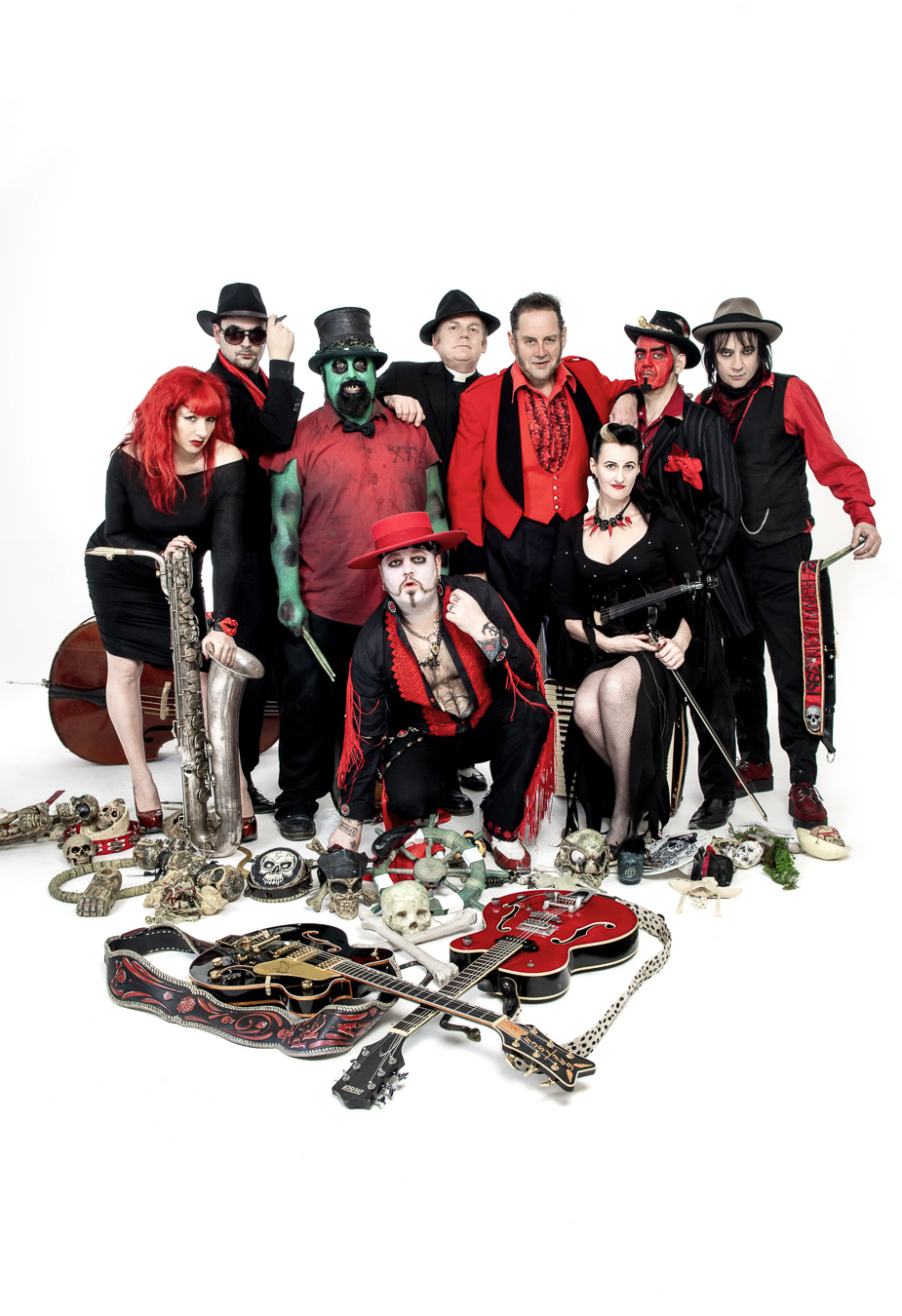 We know what you’re thinking. You’re thinking: “Why should I care about The Urban Voodoo Machine? They’ve been around for ages, haven’t they?

We know what you’re thinking. You’re thinking: “Why should I care about The Urban Voodoo Machine? They’ve been around for ages, haven’t they? Aren’t they a novelty band who wears funny make-up? Don’t they sometimes play jazz? Aren’t half of them dead or something?”

So bear with us, sunshine, cos you clearly need educating.

The story starts with Paul-Ronney Angel, a man with a double-barrelled first name. I could be a wanker about this and say the story starts with Bon Scott-era AC/DC – with Tom Waits, or the Clash, Louis Armstrong, the Pogues, the Sensational Alex Harvey Band, Johnny Cash, Lionel Bart or Bertolt Brecht – but let’s stick with Paul-Ronney, it’s quicker. Paul-Ronney Angel ate his parents and fled the fjords of Norway with just a bottle of moonshine and several slices of decomposing fish in his back pocket. (Before he left they tried him in the Norwegian Army – he lasted a total of five hours.)

After that, Angel washed up in London during the dying breaths of Thatcherism and took advantage of all that swinging London had to offer: he sold The Big Issue, busked Johnny Thunders & Robert Johnson numbers in Soho bus stops and played guitar for anyone who’d have him.

The Urban Voodoo Machine came to him in 2002 as a fully-formed idea. He’d lead a band who’d play ‘Bourbon Soaked Gypsy Blues Bop’n’Stroll’. They’d dress in black and red. There would be a LOT of them. And their music would sound like a great night out in a dangerous part of town. From the get-go, The UVM fused junkyard blues and stinging rockabilly with mariachi horns, fiddles, sinister cabaret and punk rock tangos. “I wanted to play rock’n’roll music with a different instrumentation,” says Angel, “taking inspiration from everything from delta blues, latin and gypsy music without losing the spirit and attitude of punk.” His lyrics – part Lemmy, part Bob Dylan – made other (more acclaimed) songwriters sound totally. Fucking. Boring.

“We’re not Americana and were definitely not ‘retro’,” says Angel. “I write songs about living in London right now. Although having a shit time, no money, heartbreak, mental illness, addiction and suppression from the big guy is kinda universal and timeless, I guess…”

Yeah-yeah-yeah,” you’re thinking, “but can they cut it live?” Well, there’s a reason why they’ve played Glastonbury, Download, Latitude, Bestival, Hard Rock Calling and toured with The Pogues and New York Dolls. With an act honed alongside the burlesque dancers, snake-charmers and fire-eaters they call friends, The UVM have become one of the greatest live acts in the country – terrifyingly bizarre, hysterically funny; a riot for the eyes and sensation for the ears: a sing-a-long, drink-a-long, clap-a-long affair.In 2006 they launched the Gypsy Hotel Club in the then-unfashionable part of London’s East End, Dalston, a monthly Bourbon Soaked Snake Charmin’ Rock’n’Roll Cabaret night for likeminded misfits, movers and shakers. Time Out Magazine wrote, “If you have 12 hours to live, spend it at Gypsy Hotel!”

Magazines and newspapers have lauded them for their “mariachi-influenced blues, whiskey-soaked country rags and punkabilly-style rave-ups” (The Washington Post) and noted that they’re “drawing deep from a dirty well where Tom Waits, Nick Cave and Dick Dale are enjoying a burlesque all-nighter with Ennio Morricone” (Classic Rock). They became one of the few bands that could appear on Clive Anderson’s Loose Ends on BBC Radio 4 and Britain’s biggest heavy metal festival Download in the same year and win at both.

In 2014, when Paul-Ronney named their third album Love, Drink & Death! he had no idea what the year had in store. In October, fiddle-player Rob Skipper died of an accidental heroin overdose, aged just 28. Guitarist Nick Marsh (formerly frontman of Flesh For Lulu) fought throat cancer throughout that year. He died in June 2015, aged 53. The Voodoo Machine transformed themselves into a New Orleans-style marching band for his funeral. The Urban Voodoo Machine Marching Band also played the Classic Rock Awards that year – the only band to do so without electricity.

And that brings us to new album Hellhound Hymns. Marsh plays on eight of its 13 songs. (Angel: “He was really putting the hours in when he knew the cancer had come back. He was like, ‘Right, these might be my last recordings with this band, so let’s roll the tape and make it a good one!”) To borrow one of the song titles, it’s all mixed-up. It’s part wake, part protest, part valediction – a party at the gates of hell – because the greatest tribute you can pay the dead is to live life to the full: “We will sing and we will dance/We will drink and we will laugh/We will not forget the past and our fallen brothers…”